Meeting of the Major Superiors of the Order of Camillians

The superior general presides over the government of the entire Order. He has jurisdiction and authority over the provinces, the vice-provinces, the delegations, the houses and the religious(Constitution, 97).

The general chapter, wherein resides the supreme collegial authority of the Order, is formed of representatives of the whole Order and thus is a sign of unity in charity (Constitution, 113)

We are beginning the preparations for the fifty-ninth General Chapter of the Order of Camillians which we will celebrate starting on 2 May 2020 and whose subject will be ‘Which Camillian Prophecy Today? Peering into the Past and Living in the Present Trying to Serve as Samaritans and Journeying with Hope towards the Future’

The subject of prophecy is once again of great contemporary relevance and appears always new as a challenge for consecrated life today. Let us welcome the invitation of Pope Francis who has repeatedly called our attention to this specific characteristic of consecrated life: prophecy! ‘I hope that you will wake up the world’ because the known characteristic of consecrated life is prophecy. As the Pope urged the Superior Generals: ‘evangelical radicalism is not exclusive to religious, it is required of everyone. But religious follow the Lord in a special way, in a prophetic way’. This is the priority that now applies to us: ‘to be prophets who bear witness to the style of life that Jesus chose for himself in the incarnation…A religious should never renounce prophecy’.

A prophet receives from God the capacity to scrutinise history, to live and to interpret events: he is a like a sentry who keeps vigil during the night and proclaims the dawn (cf. Is 21:11-12). He knows God and he knows men and women, his brothers and sisters. He is able to discern and denounce the evil of sin and injustice because he is free; he does not have to answer to teachers other than God; and he does not have interests different to those of God. Usually a prophet is on the side of the poor and the defenceless because he knows that God Himself is on their side!

It is important to know our history so that we can know who we are, our profile, our identity, our spirituality, our ministry and our mission as Camillians in society and the Church. I believe that there is a need to have our young generations know about the history of our leadership which is usually studied during the novitiate and then forgotten about. It will be impossible to project our future without having in our hearts and our minds the book of our history.

I would like to enter the dimension of prophecy which sees the time of history as the καιρός of God, with an outlook of gratitude for the past of our Camillian story in order to continue to live the present in a Samaritan way, in a dynamic towards a future rich in hope.

The criteria for selection as regards historical facts in this text are defined by the biographies of the Superior Generals and the events of the General Chapters: our martyrs to charity (the hundreds of Camillians who offered up their lives at the beginnings of the Order in caring for the plague-stricken); the events of crisis (wars, the Napoleonic dissolution of the religious Orders); and the interventions and the appointments of the Holy See during the course of the nineteenth century. In addition, I will comment on some ‘curious’ facts of this rich and picturesque history of the Camillians.

The text is organised around four subjects: (I) the beginnings of the Order of Camillians under the leadership of St. Camillus de Lellis and his immediate successors (the sixteenth and seventeenth centuries); (II) the Superior Generals and the General Chapters from the eighteenth century to the twenty-first century; (III) some observations about the first five and the last seven General Chapters; and (IV) some statistical data on the Order as regards the last sixty years (1959-2019). 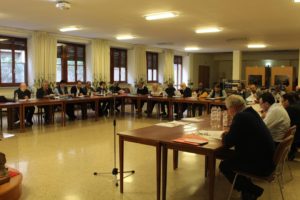 The Beginnings of the Order of Camillians under the Leadership of St. Camillus and his Immediate Successors (the Sixteenth and Seventeenth Centuries)

In this first section of this text I will follow the approach that our historical confrere Fr. Piero Sannazzaro adopts in his classic work Storia dell’Ordine Camilliana (1550-1699) (‘A History of the Order of Camillians (1550-1699’).

Fr. Calisto Vendrame, a former Superior General of the Order (1977-1989), in his preface to the work by Fr. Sannazzaro observes: ‘We know that history is much greater than the facts. These are signs and expressions of a reality that continues in the present and continues in the future, so that the past explains the present and the present does not cease to unveil the past…If the greatness of a community lies in generating people who are able to die for others, we can say that…the multitude of martyrs to charity and practically all our confreres who offered themselves as martyrs to serve the plague-stricken, knowing that they were risking their lives, is the finest proof there is that the ‘pusillus grex’ of the giant of charity, during this first century of life, was shown to be a worthy heir of its great father’.

‘Camillus, during the twenty-four years of his government of the Order, of which sixteen were spent as Superior General, founded sixteen houses. He admitted to profession 311 religious, of whom 69 died. There remained 242 professed, of whom 88 were priests and of the rest more than a half were intended for the priesthood. In addition, there were more than 80 novices. Since the beginning of the company, 170 had died. This was a striking and unprecedented death rate compared to the death rate experienced by other Orders. The first companions – ‘a company of pious and good men’ – of Camillus in the Hospital of St. James for the Incurables in Rome were: Fr. Francesco Profeta (the chaplain of the hospital) and the laymen Bernardino Norcino, Curzio Lodi, Ludovico Altobelli and Benigno Sauri’.